Power saws are magnificent tools. If you need to dimension boards or get them ready for connecting, you can rest assured that there is at least one type of saw that can do the job for you. However, with technological advancements leaving their mark in the tool-manufacturing game, and the influx of producers from all over the world looking for a piece of the market pie, it can be a challenge finding the right tool for a certain job.

Perhaps one of the most baffling decisions one needs to make regarding power saws is whether they should get a track saw, a table saw, or both. After all, they can both be used to dimension boards and make mitered cuts. This article aims to clear any misconceptions regarding either of these types of saws, and we’ll give our two cents on which saw you’ll benefit from more.

What is a track saw?

You’ve most likely already seen a track saw but had no idea what it was called. Don’t worry; this is common in many people just learning the names and functions of tools.

Benefits of a track saw

The first main benefit that you get from using a track saw is you can cut boards of almost any length. Even without a rail, you can produce long cuts on your stock, though the straightness of the cut can be affected if you’re going at it by eye.

The next benefit is that you don’t need external clamps or vices to keep your cuts straight. The rail which guides the saw and blade usually has rubber strips fixed to the bottom. This prevents slippage of the rails which could impair the quality of the cut. However, you need to ensure that the rubber slips have a good grip on the surface of your board. This means brushing off any wood dust or chips from both your board’s surface and the rubber slips.

Next, you can use a track saw in tight-fitting spaces. The track saw and rail don’t take much foot space so you can be a little bit more flexible in navigating the saw in small spaces. In fact, you can use the track saw in places where your table saw can’t – i.e., upstairs, between indoors and out, etc.

Another reason why people opt for a track saw over a miter saw, or table saw is that it’s extremely portable. Table saws take up a bunch of space and need a wide area of clearance in every direction of the table. With a track saw, you can lift and carry it with a single hand while you place the lightweight rail under your armpit. It’s essentially a lightweight option for doing a number of different tasks.

Another advantage of having a track saw is that it produces almost-perfect edges. Unlike a table saw, there will hardly be any pointy splinters across the edges of a panel, so very minimal sanding or final touches are needed to get the board in tip-top shape for further processing.

The only thing you need to consider when using a track saw is time. To be more specific, you’re going to experience a ton of downtime making measurements, aligning the rail, and making guide plunge cuts before ripping through the stock. Track saws come with a depth gauge, so setting how deep the blade penetrates into the board is not an issue. However, making miter cuts and ripping through long boards requires a bit of setup.

What is a table saw?

Almost everybody is familiar with what a table saw is, and there’s hardly any confusion regarding what it does and what it looks like.
A table saw consists of a motor that is fixed to the under-part of a table while a blade protrudes from the upward-facing surface of the table. The blade can rise and fall past the table’s surface depending on how you set the depth. It is not a handheld tool and takes quite a bit of space in workshops.

Benefits of a table saw

There are a couple benefits that people can get from owning and using a table saw. The first of which is the ability to make repetitive cuts. By setting the blade’s depth and the location of the fence, you can cut through boards to produce identical sizes in no time. It’s a real life- and time-saver having different mechanisms in place for making repeated cuts, especially when you need to make and use numerous boards of the same dimensions.

Next, a table saw truly offers a ton of versatility. Whether you’re ripping boards or making crosscuts, a table saw can be the go-to tool. Even though other types of saws can do this, it’s really the time-saving factor that makes a table saw a nice tool to have.

Finally, a table saw’s worktable offers support for cutting through large boards. There’s no need to worry about the board slipping, the blade sliding, or the table from falling out of place. As long as the table saw is set up according to the manufacturer’s standards, you should be good. 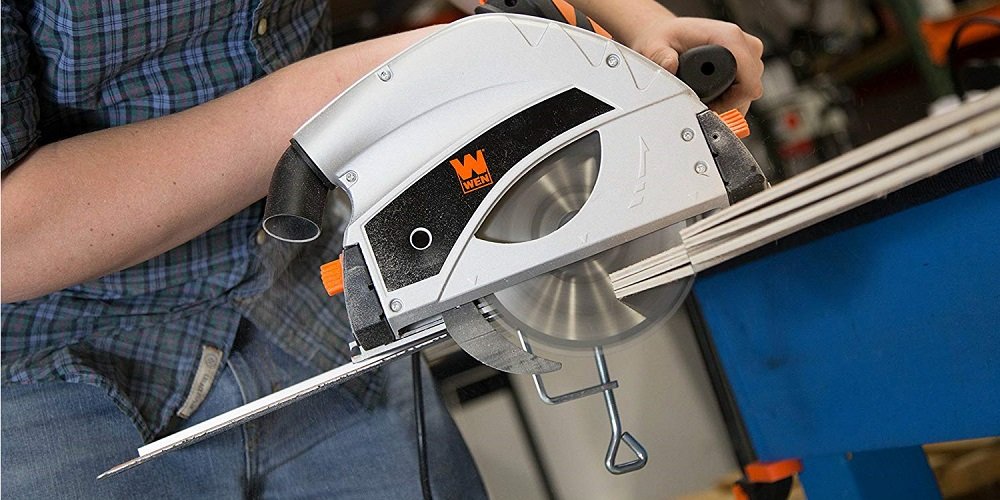 However, having a ton of uses doesn’t come without a few downsides. The first thing not to like about table saws is that it takes up a ton of floor space. If your workshop has limited space, you might have a tough time making enough clearance space on all sides of the table saw.

The next thing that you need to consider is the tool’s lack of portability. It’s not really a tool that you can take with you to various job sites. If you need to rip through boards at various places, it’s always easier to bring the tool to the material than the other way around. Unfortunately, a table saw’s size and weight doesn’t allow this.

Can you live without a track saw or table saw?

So the final question: which of the two saws should have a higher place on your list of must-own power toolsUltimately, it comes down to what you need and where you need to do it. If you work out of your garage, provided that it has a ton of floor space, a table saw might be the preferable option. A track saw reigns supreme if you’re limited by space or need to dimension boards on-site. Track saws are also considerably less costly than large table saws, so if your wallet does the decision-making for you, a track saw’s versatility and value can really be a cost-effective tool to own.