The harsh elements of nature can really go Mike Tyson on the exterior of your home. In doing so, the paint of your home is prone to chipping, the pathways filled with dirt and grime, and your yards cluttered with fallen leaves and debris. A good pressure washer is key to keeping your home’s exterior, and even your car’s body, in tip-top shape. There are several benefits to owning an electric pressure washer, one of which is that regularly cleaning your home’s exterior can increase its value by up to 5%, assuming you use the pressure washer on a regular basis. 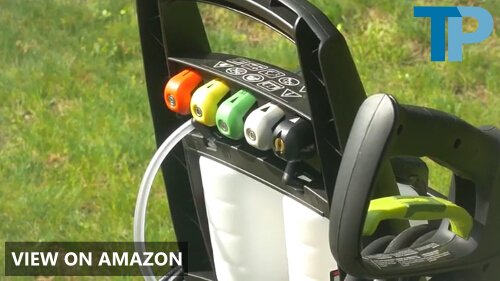 In today’s article, we’re going to take a look at two very highly regarded pressure washer models: the SPX3000 from Sun Joe and the K2000 from Karcher. They both provide around the same amount of power and use about the same amount of water, but their differences may surprise you. Let’s see which of these models comes out on top after comparing them side-by-side.

Sun Joe SPX3000
Pounds-per-square-inch is the unit of measurement that shows how much force is produced by a pressure washer’s motor, and the GPM rating determines how efficient it is at using water to provide force. The Sun Joe’s 14.5-amp motor produces up to 2,030 PSI of force while using up only 1.76 GPM of water. 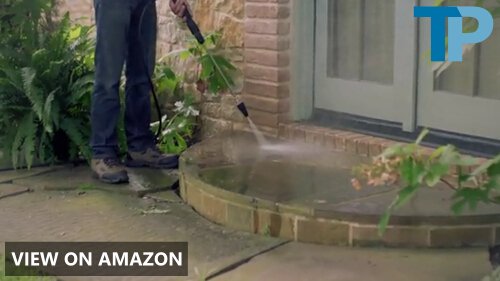 Conclusion: There’s hardly any difference in PSI – 30 to be exact – but the Karcher takes the cake when it comes to efficiency in water usage. The low 1.3 GPM rating is rather surprising considering how much power the motor can generate. In the long run, you’re going to save more on water consumption with the Karcher than you could with the Sun Joe.

Sun Joe SPX3000 & Karcher K2000
Any pressure washer model worth considering should come with an onboard detergent tank. Both the Sun Joe and Karcher come with two detergent tanks where you can place different types of soaps without having to empty a tank out beforehand. The use of various soaps is required for cleaning different surfaces (e.g., patio furniture, paved pathways, and vehicles). You’ll ultimately save more time in your cleaning tasks with multiple tanks than with a single soap-tank pressure washer model.

Sun Joe SPX3000
Not very many pressure washer models allow the intake of hot or warm water since it can increase the risk of overheating and ruin the motor. That’s not the case with the Sun Joe; this model can take in water of up to 104°F and shoot it through the nozzle of the wand. Warm water is much more effective at dissolving dirt clods, greasy spills, and caked-on messes. 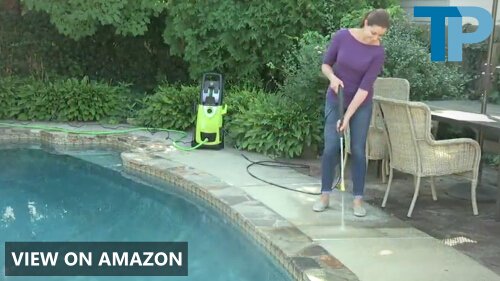 Karcher K2000
The Karcher only uses water with a maximum temperature of 70°F. This mainly has to do with the cooling system inside of the K2000 which uses the flowing water to keep the engine cool and running optimally. Any water over 70°F can significantly increase the risk of overheating.

Conclusion: It may seem insignificant to many users, but having the ability to blast jets of warm water is actually a major plus. Not many pressure washers have the capacity to let the warm water flow through them, making the SPX3000 a rare model, indeed. Honestly speaking, high-pressure blasts of water can eliminate greasy spills and dirt, regardless of the water’s temperature.

Sun Joe SPX3000
Most pressure washer models nowadays come with quick-connect nozzles that you attach to the tip of the wand to adjust how concentrated or fanned-out the spray of water is. The Sun Joe SPX3000 comes with five different nozzles: a super-concentrated 0°, a minor 15°-wide spread, a wider 25° fan, a low-pressure 40° for windows and other delicate surfaces, and a nozzle specifically for blasting suds. 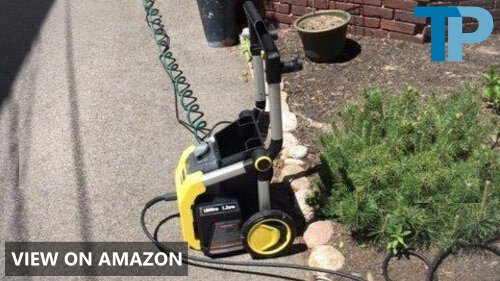 Karcher K2000
The Karcher uses an identical quick-connect nozzle system to adjust how much pressure to spray. The only difference is that the Karcher doesn’t come with a 25° nozzle which isn’t really a deal-breaker, but you might find the 15° nozzle tip to be too concentrated and the 40° to be too spread out for certain applications.

Conclusion: The missing 25° quick-connect nozzle for the Karcher shouldn’t be something that turns you away from the model, but it’s definitely worth considering, especially since applying too much force when spraying certain objects can ruin its paint job or surface.

Sun Joe SPX3000
If you ask anybody who owns a pressure washer what’s the worst thing about owning one, they’ll most likely tell you that cleanup is a huge hassle, especially if they need to wrap the pressure hose to prevent damage to it manually. Unfortunately for the Sun Joe, you’re stuck with manually wrapping the cord when you’re finishing cleaning, and you always run the risk of causing rips or tears in the hose with improper care.

Karcher K2000
The Karcher has simplified cleanup considerably with the built-in hose reel. With a turn of the handle, you can reel in the 25-foot long hose with ease. While turning the handle, all you have to do is watch as the hose comes in and coils around the reel effortlessly. 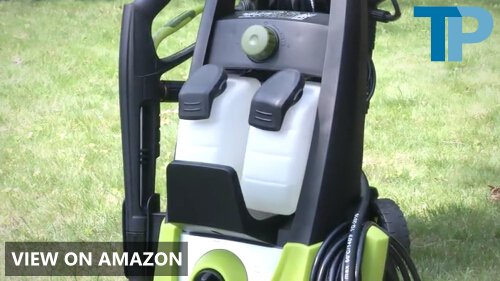 Conclusion: The fact that the Karcher K2000 comes with a hose reel is a plus in our book. With a hose reel, you’re left manually wrapping the hose around your arm or shoulder, and the hose seemingly always wants to free itself from your grasp.

After comparing these two models, we have to say that the better model to go with has to be the Sun Joe SPX3000. At first, the unit looks just like any other pressure washer you can find on the market, but its ability to take in warm water – up to 104°F – is truly special. Cleaning caked-on gunk and oil spills from your car and driveway is a breeze when blasting strong jets of pressurized warm water.

The Karcher’s hose reel is really a time-saver, but in terms of performance, the reel has no real contribution. If you asked us which of these models to get, we’d highly recommend going with Sun Joe’s SPX3000. 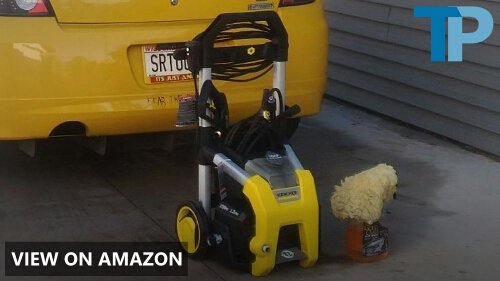 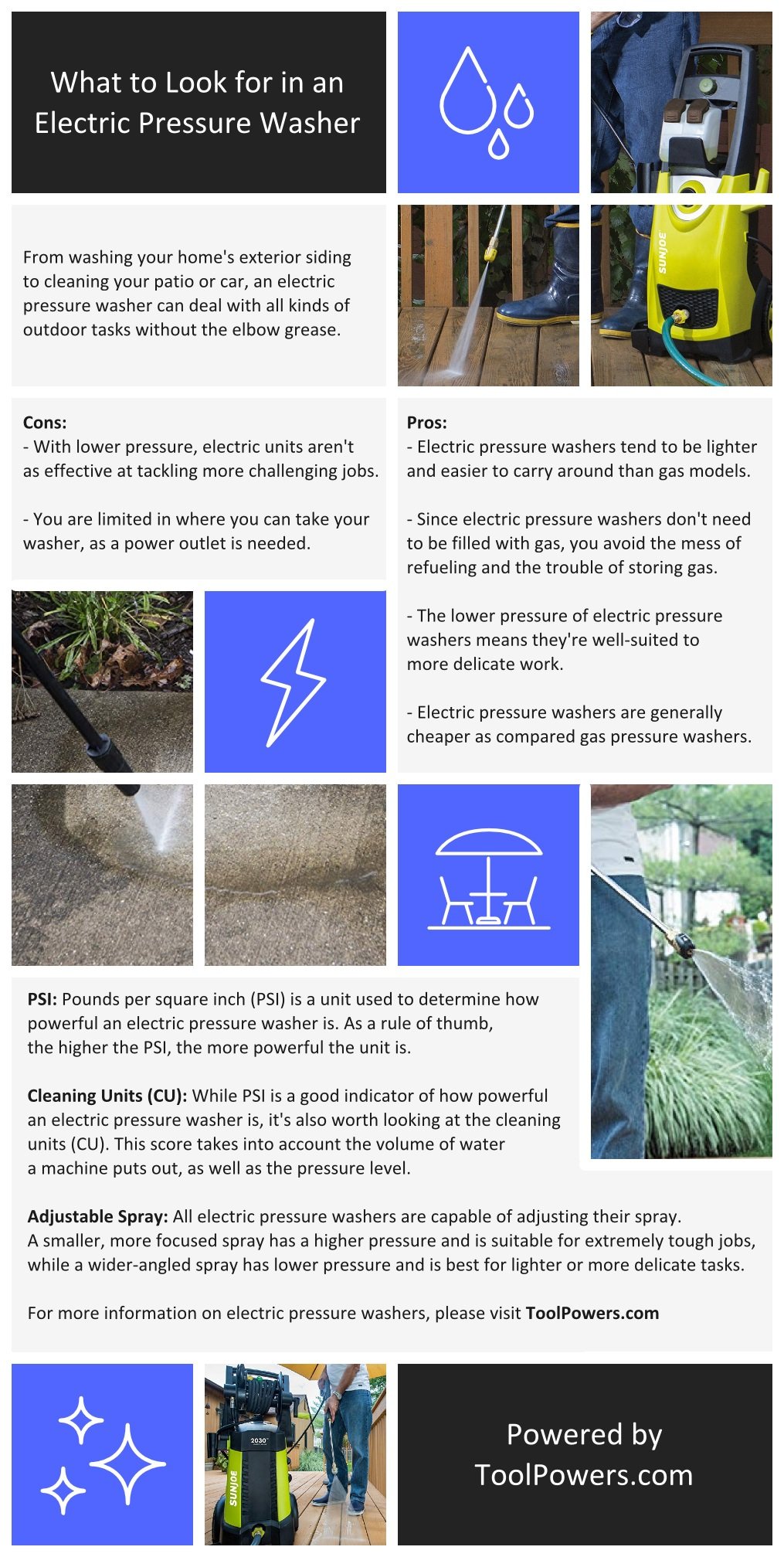