A portable air compressor can be a great tool to have during emergencies. If your car’s tire is flat or you need to pump up a basketball for a pickup game, then you’ll be glad to have one of these babies on hand. It sure beats traveling to the nearest gas station to pump up a single ball, and everybody knows about the dangers of driving with a flat tire.

Kensun is a company that specializes in making accessories for all types of vehicles, including emergency tire pumps. In this article, we’re going to take a look at two of the company’s portable air compressors – the Rapid (Model J) and Swift (Model H). They’ve both garnered quite a fair number of thumbs ups from their customers. Today, we’re hoping to determine which of the two would be the better model to own and use.

Rapid
The maximum PSI that can be set on the Rapid is 90. For most light-duty inflating jobs like filling up a tire, ball, or inflatable pool, doing so won’t take too much time at all. Of course, it all depends on how big of an item you’re inflating. You also need to be aware of the continuous runtime of the device, so you don’t overheat the motor (more on this later).

Swift
The Swift has a slightly more powerful PSI range – up to 120 PSI. A higher PSI rating means that the device is more time-efficient in its air delivery. However, with such a high PSI count, you need to be careful when inflating delicate objects such as sports balls and bicycle tires.

Conclusion: Between 90 and 120 PSI, we can’t determine which would be better. Theoretically, the Swift’s 120-PSI rating means quicker inflating times than the Rapid’s 90-PSI count, but there are hardly any situations where a portable air compressor such as these two would need to reach their maximum airflow potential.

Rapid
Apart from the speed of delivery, we also need to consider how much air is being shot out when the air compressor is activated. The GPM (gallons per minute) rating indicates how much airflow is being produced. This tool delivers about 7.9 GPM of air or about 30 liters.

Swift
Although the Swift delivers quicker bursts of air, it has a slightly lower GPM rating at only about 4.8 GPM or roughly 20 liters. A reduction in GPM isn’t the end of the world, and all that matters is that the tool can deliver air enough air in a timely manner.

Conclusion: GPM refers to how much air the tool can deliver in a minute. When looking at both the Rapid and Swift, once again we’re conflicted on whether you need more airflow or not. Having too much air produced can potentially lead to your items becoming too inflated and popping on you. Just exercise caution and common sense when operating one of these tools.

Rapid and Swift
One way that a portable air compressor like the Rapid and Swift differs from their regular-sized counterparts is that it has smaller, more delicate motors that can’t handle extremely long runtime sessions. Both of these Kensun air compressors can run for about 30 minutes at 35 PSI before needing to rest. This is enough to fill up all four of your car’s tires with time to spare.

Rapid
There are two cords that you need to pay attention to the AC cord that plugs into a standard outlet and the DC cord that draws power from your car’s battery via the cigarette lighter port. The length of the Rapid’s AC and DC power cords are 5 feet and 10-7/8 feet long respectively.

Swift
The length of the Swift’s AC and DC power cords are 3-1/3 feet and 10-7/8 feet respectively. We can see that the AC cord’s length is considerably smaller than the Rapid’s, but for use in vehicles, they have the same range of movement.

Conclusion: The more important thing to consider is the length of the DC cord that plugs into your car’s cigarette lighter port. It needs to be long enough so that the tool’s air hose can reach all four wheels without trouble. Both of these tools have similarly sized DC cables, so neither of them has preference over the other.

Rapid
The Rapid comes with an air hose that’s about 24 inches long. A 2-foot air hose isn’t the longest thing in the world, especially when it comes time to pump air into your tires. However, paired with the long 10-7/8-foot DC cord, reaching all four of your tires shouldn’t be an issue for most sedans.

Swift
The Swift features a long(er) 31-inch hose. For most cars and several trucks, the length of the Swift’s DC cord and air hose should provide you with the ability to fill up all of your car’s tires easily.

Conclusion: For a better range of movement, you should pick up an air compressor that features a longer air hose. Between the Rapid and Swift, the Swift’s 31-inch air hose would be the better option since it has a higher likelihood of reaching all four of your car’s tires without needing to put any unnecessary strain on the hose or DC cord.

Rapid
The Rapid comes with a digital pressure gauge which shows how much air is being delivered. You can also set the tool up to deliver a certain amount of air, and the tool will automatically shut off when the object has reached the desired PSI. After testing the digital gauge with several manually operated gauges, we found no differences in almost 100% of our tests.

Swift
The Swift comes with an analog pressure gauge. Once again, we tested how accurate the tool’s internal system is at measuring how much pressure is being applied and are happy to report that like the Rapid, almost 100% of our tests came back no differences at all.

Conclusion: The pressure gauge is arguably the most significant difference between the Rapid and Swift. We prefer the Rapid’s LCD display, but the analog gauge on the Swift doesn’t appear to have any accuracy problems. The one minor annoyance we found was that after unplugging and plugging the compressor back in, it will reset to the 35-PSI default setting every time.

So basically what we have here are two Kensun-made air compressors – the Rapid and the Swift – which look similar and have almost identical performances. The minor differences we found were the PSI and GPM ratings which, in our humble opinion, shouldn’t be a make-or-break factor in your purchase decision since portable air compressors are meat for light-duty inflating jobs.

The Rapid’s digital display and the Swift’s analog gauge are a significant difference between the two, but since they’re both almost perfectly accurate all the time, the only thing to consider is whether you prefer looking at an LCD display or a spinning needle.

The one most significant consideration you need to take into account is the length of the DC cord and air hose since not all cars are the same shape. In general, longer cords and hoses are preferable over shorter ones. Thus the Swift is very slightly better than the Rapid in our books. 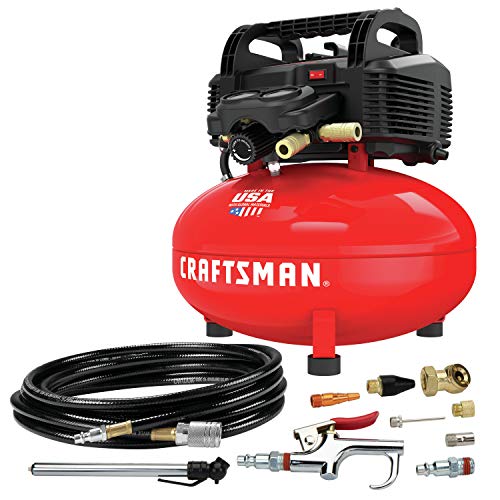