Pressure washers are fantastic tools that make cleaning the outdoors easy and enjoyable. With the pull of a trigger, enjoy quick jets of high-pressure water blasting all sorts of grime and debris off of your driveway, patio, brick wall, and even outdoor furniture. Compared to the traditional garden hose, even an entry-level pressure washer delivers greater amounts of force in concentrated or wide-angled sprays while saving water.

Today, we’re going to take a quick look at four of Karcher’s corded-electric pressure washers – the K2, K3, K4, and K5. From their model names, you can probably guess that the greater the number, the more powerful it will be.

Karcher K2
The force in which water is expelled from the nozzle is measured in PSI (pounds-per-square-inch), and the amount water used is measured in GPM (gallons-per-minute).

Pressure washers should be able to perform much more effectively and efficiently compared to garden hoses (around 40 PSI and 25 GPM). The K2 has PSI and GPM ratings of 1,600 and 1.25.

Karcher K3
The K3 delivers up to 1,800 PSI and 1.3 GPM. Compared to the K2, you’re not getting very much added force, but certain applications may require greater PSI of water to clean (e.g., oil spills from your driveway).

Karcher K4
The K4 shoots up to 1,900 PSI and 1.5 GPM. This is also quite far from being among some of the more powerful residential-grade electric pressure washers available on the market, though in our experience, 1,900 PSI should be the minimum if you plan on moving leaves and other large pieces of debris from paved surfaces.

Karcher K5
The K5 produces up to 2,000 PSI and 1.4 GPM. It’s the most water-efficient model here while providing the most force. If you’re in need of force while being environmentally aware, the K5 is the model for you.

Conclusion: For most outdoor cleaning jobs, you’ll want as much force as possible. Of course, you can play around with the quick-connect nozzles or variable wand (more on this later) to clean a wide range of different surfaces. Regarding power delivery, we feel that the K4 and the K5 meet the minimum requirements for what we’d consider a great entry-level pressure washer.

Karcher K2
You can already guess what the spray gun is, but how well-built is itIf you look at the K2’s spray gun, you’ll notice that there’s nothing fancy about it. It’s a standard spray gun with a trigger that aims at any and all surfaces you want to blast clean.

Conclusion: The K3, K4, and K5’s spray gun is an amazing piece of technology. It’s also a feature that’s not commonly found in many pressure washers. If you can guesstimate how powerful the water is being shot out of the spray gun, then the K2’s standard spray gun would suit you just fine.

Karcher K2
Once you begin using a pressure washer, it can be difficult to stop. This can lead to unwanted damage to the unit’s motor, ultimately rendering it useless if it experiences heat damage. In order to help with heat dissipation, the K2’s motor uses air around the unit to keep it cool. This isn’t really effective, especially if you live in warm areas, but it’s something.

Karcher K3, K4, and K5
As for the three other models, their engines are cooled with a water-cooling system. When the pressure washers draw in cold water from a tap, the water passes around the motor, keeping it cold to the touch and preventing heat damage.

Conclusion: The only complaints that the K2 received is that the engine heats up rather quickly, but shutting the machine off and leaving it to cool solves it entirely. As for the rest of the models, you can keep it running for longer thanks to their built-in water-cooling system.

Karcher K2, K3, K4, and K5
Most pressure washers come with quick-connect nozzles that offer different spray angles. They usually range from 0° (super concentrated) to 25° or even 40°. As for these Karcher-made pressure washers, the wand doesn’t use quick-connect nozzles, but instead, it uses a Vario Spray Wand which, when twisted, can alter the angle of the jet of water.

This is easy to use and works like a charm, making each of these models work when cleaning windows, paved walkways, and patio furniture.

Karcher K2, K3, and K4
The one downside of pressure washers is cleanup. At the end of the day after playing for countless hours with a pressure washer, coiling the hose and storing it in a safe place can be too much to ask. However, for the K2, K3, and K4, this is necessary since they don’t come with a hose reel.

Karcher K5
The K5, on the other hand, does. This means that cleanup is a breeze; reel in the 20-foot long hose and you’re all done. It’s a simple feature that, evidently, isn’t available in many pressure washers.

Conclusion: We don’t need to tell you that the K5’s hose reel is superior to the Karcher K2, K3, and K4’s nothing. If you purchase any of the three hose reel-less models, remember that dealing with long 20-foot hoses is a hassle to wrap and store safely.

There are several features in these Karcher corded-electric pressure washers that are uncommon in other brand-name devices, such as the Vario wand which twists to adjust the spray angle and the water-cooling system that keeps the motor cool.

In our opinion, between the four Karcher models discussed in this article, the unit that offers the most value and convenience has to be the Karcher K5 pressure washer. First of all, it delivers up to 2,000 PSI and 1.4 GPM, making it the most powerful and proportionally most water-conscious model here. Another reason that makes the K5 superior to the rest is that it comes with a hose reel.

We can’t stress this enough: the hose reel will save precious minutes as opposed to manually coiling the hose when you’re already tired from having a water pressure war with your neighbors. 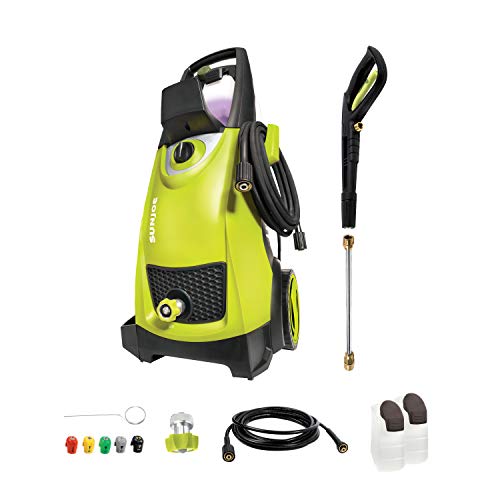