A power drill is one of the most fundamental tools you can have in your arsenal. You don’t need to be an aspiring carpenter or professional handyman to own one of these tools. A power drill can come in handy for basic jobs like assembling furniture, hanging picture frames, and even mixing cake batter and concrete.

But like any power tool, you shouldn’t just pick up the first random model you find on the shelf. In this article, we’re going to compare two highly regarded power drills by two of the most infamous manufacturers – the LDX120C from Black+Decker and the DDB181-02 from Bosch. Now, without further ado, let’s dive right into our comparison.

Black+Decker LDX120C and Bosch DDB181-02
The first most prominent feature of both of these power drills is that they’re cordless. Now, we could go into the whole debate about why cordless power tools are better than corded or vice versa, but what’s important is that you know the basics of what going cordless means.

Without any power cords tying you down, you don’t need to worry about tangling or tripping. Cord-free also means getting work done in cramped spaces while angling the tool’s chuck at all sorts of angles. However, what you need to take into account is that going cordless means not having a constant source of power.

Black+Decker LDX120C
Let’s talk about these tools’ batteries for a second. A cordless drill draws power from a battery, typically a rechargeable Li-Ion. The biggest misconception about battery power is that a higher voltage rating equals superior drilling power. This isn’t true, but it does mean more power per charge. The B+D cordless drill comes with a 20V battery which is categorized as general-purpose.

Bosch DDB181-02
The Bosch, on the other hand, comes with a smaller 18V battery. Once again, this does not mean power, but with a reduction in the voltage rating does mean it’ll spend more time recharging. This, of course, means an increase in downtime which can be serious if you’re doing contract work.

Conclusion: For home use, the battery’s voltage rating hardly matters, but if you’re serious about your craft and downtime is a serious problem, just note that a larger battery – in this case, the B+D’s 20V battery – would be the better option to go with.

Black+Decker LDX120C
Although a bigger battery offers more power per charge, it generally requires a longer charging period when charging from 0 to 100. We found the B+D’s charger only needs about 2 hours to refill a depleted battery, which is quite impressive compared to the standard 2-1/2-hour waiting time in other brands.

Bosch DDB181-02
Do you know what’s more impressive than a quick 2-hour charging time60 minutes! And that’s exactly what the Bosch’s battery chargers offers. To fill the 18V battery from 0 to 100 takes about an hour, meaning you can get back to work in half the time of the B+D.

Conclusion: Between the two, it’s obvious that the Bosch’s battery charger and reduced charging time is beyond expectation. It’s fair that it takes less time to refill considering the smaller battery size, but seriously – 60 minutes for 100% capacity is nothing to scoff at. Of course, you could always invest in multiple batteries and relieve yourself of the whole “waiting for the battery to recharge” issue.

Black+Decker LDX120C
Power drills are known for delivering hundreds of RPM for removing tons of material, but you may not want to work at max speed, especially when working with delicate objects like picture frames, low-density particle boards, and drywall. The B+D has a touch-sensitive variable trigger which delivers a maximum of 650 RPM.

Bosch DDB181-02
The Bosch also has a touch sensitive trigger, but this is paired with the two-speed motor. The first gear produces up to 650 RPM. On second gear, the tool can go up to 1,300 RPM; twice as fast as the max speed of the B+D.

Conclusion: But if you know even a little about drilling, you’ll understand that speed is not the most important consideration. Sure, you can remove material more quickly with a quicker-working chuck, especially less dense materials like drywall and softwood, but you should also take into account how much torque to tool provides. In terms of speed, we feel that you can complete most jobs with a 650-RPM tool, so the B+D and Bosch are basically at a stalemate.

Black+Decker LDX120C
Torque is extremely important when driving screws to assemble furniture or hang picture frames. However, you should note that a drill is mainly used to remove material, so if you’re looking to assemble large furniture with long fasteners, consider getting an impact driver. A drill can be used in a pinch provided it offers enough torque. This tool delivers a maximum of 115 inch-pounds of torque (11 clutch settings) which is far from heavy-duty but enough to do drive short fasteners.

Bosch DDB181-02
The Bosch, on the other hand, delivers more than twice as much torque as the B+D. This tool has a torque rating of 350 inch-pounds (16 clutch settings), making it the considerably better of the two for driving fasteners and connecting large wood workpieces.

Conclusion: Remember that an impact driver is an ideal tool to have to drive long fasteners to connect wood boards and panels. But if you just plan on putting together pre-made furniture, hang picture frames, or drill pilot holes, a cordless drill will do. Between the two, the Bosch is the more powerful unit, and it comes with 16 clutch positions for maximum torque versatility.

Black+Decker LDX120C
Something that you may not have considered is the size of the drill’s chuck. The larger the chuck, the larger the bit can be mounted, thus allowing the tool to perform heavier-duty drilling jobs. The B+D comes with a 3/8-inch chuck which is used for general-purpose drilling and fastening.

Bosch DDB181-02
The Bosch has a ½-inch chuck which may not sound like much of a difference compared to the B+D’s, but it means quite a lot. This is the largest chuck size available in non-industry drills so you can expect this tool to perform all sorts of drilling tasks without a hitch.

Conclusion: Of course, you should decide on whether you’d benefit more from a 3/8- or a ½-inch drill since going larger can mean going overboard. In our opinion, if you don’t plan on drilling through thick, dense materials, then the B+D’s 3/8-inch chuck would suit you just fine.

So between the Black+Decker LDX120C and the Bosch DDB181-02, which of the two would we recommendWell, thankfully, both of these tools are of superior quality, so getting one over the other should not result in buyer’s remorse. However, the Bosch is the more powerful tool in terms of speed and torque delivery, making it the optimal tool for heavy-duty drilling and fastening tasks. But if you’re looking for a tool to use around the home for light renovation projects, the B+D is an excellent tool to get without overkill.


This website is supported by readers. As an Amazon Associate we earn from qualifying purchases. 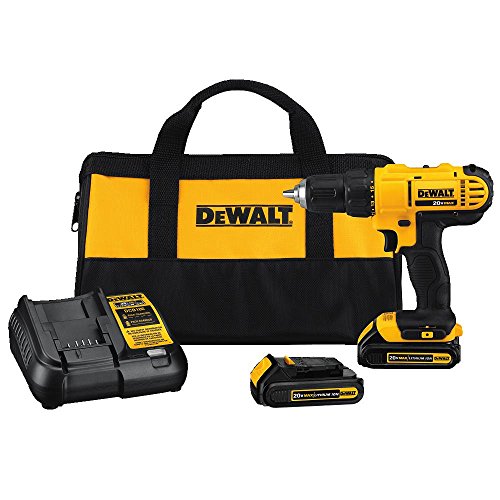