Lithium-ion (Li-Ion) power tools are the latest craze in the tools market. They don’t tie you down with short power cords and come with rather sizable batteries for a long runtime per charge. The best thing is that over time, the price of cordless tools, especially cordless power drills, have dropped significantly thanks to advances in cordless technology and a sea of manufacturers looking to get a piece of the market.

In today’s article, we’re going to take a look at two budget-friendly lithium-ion drills from BLACK+DECKER – the LDX120C and the BDCDMT120C. Catchy names, rightDespite their model numbers being a mouthful, they’re straightforward power drills that pack a lot of power and work beautifully in a wide range of applications. We’ll compare their most prominent specs and features and determine which of these two B+D li-ion drills is better.

LDX120C and BDCDMT120C
Both of these power drills come with a 20V motor which is at the higher end of the cordless power tool’s motor spectrum. It’s reasonable to expect these to be your main cordless power drill for the most demanding drilling jobs. With the right bit, either of these tools can drill through wood, plastic, and even thin sheets of metal.

LDX120C
The LDX120C can reach a maximum speed of 650 RPM. With its touch-sensitive speed trigger, you can determine how much speed to deliver to avoid damaging your material. This is about the average speed of cordless power drills, so it’s nothing to be too amazed about.

BDCDMT120C
This tool is faster than the LDX120C but not by very much. It can reach a max speed of 800 RPM. Don’t worry about damaging your materials when countersinking screws – it also features a variable speed trigger for maximum control.

Conclusion: Even though the value of a power drill isn’t solely assessed by how much speed it produces, the maximum RPM matters when time is a factor. The BDCDMT120C is the faster, more efficient power drill between the two, but as anybody who’s ever used a drill knows, torque plays a bigger role in drilling and driving screws.

LDX120C
In layman’s terms, torque determines how much power each spin of the chuck provides in driving screws and drilling through materials. Higher torque means greater power, but too much can be a bad thing since it can strip the head of the screw or completely destroy delicate materials like drywall. The LDX120C generates up to 115 inch-pounds of torque. You can control how much torque the tool delivers by twisting and choosing one of the eleven positions on the clutch collar.

BDCDMT120C
This tool also features a clutch collar, but it only has ten positions. The BDCDMT120C can provide up to an astounding 460 inch-pounds of torque. You have a better chance of sinking long screws through hard materials with this tool than the LDX120C.

Conclusion: The BDCDMT120C provides more than three times as much torque than the LDX120C, but for many household repairs and woodworking projects, you probably won’t need as much torque to drive screws. Unless you’re working exclusively with types of hardwood, you could probably get away with the lower-torque LDX120C for a lot of your projects.

LDX120C and BDCDMT120C
There’s no point in being cordless and portable if the tool is going to weight a ton. Thankfully, power drills have never really weighed that much. Even the LDX120C and the BDCDMT120C weigh differently (3.4 and 4 pounds respectively), they can both be classified as lightweight by any standard. You can throw the risk of fatigue out the window when using either of these tools in any orientation – vertically, horizontally, while hanging upside-down, and even overhead work.

LDX120C
We found that the LDX120C is a wonderful power drill and driver. It can drill deep holes in a wide range of materials, and it can sink screws with little to no resistance. However, not to take anything away from this Li-Ion drill/driver combo tool, that’s pretty much all it can do. Don’t get us wrong; we love this tool, but compared to the BDCDMT120C, it’s just not as “versatile.”

BDCDMT120C
To truly understand what we mean by versatility, take a close look at this tool. It belongs to the MATRIX series of cordless power tools by B+D. What makes this series so special is that a wide range of attachments can be used in one power tool to perform numerous tasks. All in one tool! So even though we’ve been talking of the BDCDMT120C as a drill/driver combo tool, it’s a power unit that comes with the BDCMTDD drill/driver attachment. You can swap this out for a reciprocating saw attachment, an impact driver attachment, and a router attachment, just to name a few (attachments sold separately). So when it comes to versatility, there’s no way any simple drill/driver combo tool can beat the MATRIX.

Conclusion: Hands down, the BDCDMT120C is more versatile than the LDX120C. You can turn this tool into several other types of power tools that cut, sand, drill, and trim. The LDX120C is one of the more basic drill/driver combo tools that can compete with other comparable tools, but the BDCDMT120C is in a completely different league of its own.

LDX120C and BDCDMT120C
When running on identical torque settings ad speed, we found that both of these tools use up the same amount of battery. It means that their respective 20V batteries don’t differ that much. However, if you decide to push the two tools to their maximum capacities, the BDCDMT120C will have worse fuel economy, but that’s only because it can deliver more power and speed. The good thing is that these two tools’ batteries require only about 40 minutes of charging go to 0% to 100%.

First of all, as a drill/driver combo tool, the BDCDMT120C is faster, stronger, and won’t weigh you down. But it’s more than that; in fact, if you need to trim your hedges, sand your work, or trim the edges of your workpieces, with the right MATRIX attachments (sold separately, mind you), you can turn this tool from a drill/driver to a recip saw and back in the blink of an eye. You’ve never seen a more versatile tool than the Black+Decker BDCDMT120C or any other tool in the MATRIX series by BLACK+DECKER. 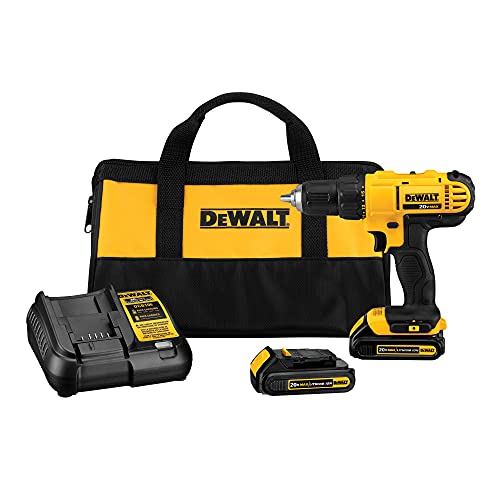