There are probably many of us who have never heard of a combination roll groover. This is understandable since the tool is used specifically for certain applications that not many hobbyists or even DIY home renovators find the need to do themselves.

However, if you feel like stepping up your game and creating your threading on steel pipes, then a combo roll groover is the go-to tool. 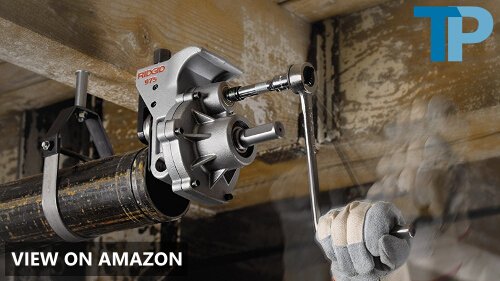 Combination roll groovers let users roll-groove pipes with the help of driving machines (sold separately). These tools can also be placed on an end of a pipe that’s already in place. The purpose of this handy tool is to create consistent even grooves on the pipe. It’s the best tool to use for installing brand-new pipes and fittings in a wide number of applications.

A quick search on the internet for combination roll groovers will yield very few results concerning the different types or different things to look out for when searching for a roll groover. The following segment will focus on the most important specs and features to pay attention to if you’re considering purchasing your own.

Not everybody works with the same sized pipes and not every combo roll groover is designed to groove on every pipe. Make sure you find a model that fits your needs. Many of the best models can make grooves on pipes as small as 1-1/4-inch schedule 10 pipes and as large as 6-inch schedule 40 pipes. 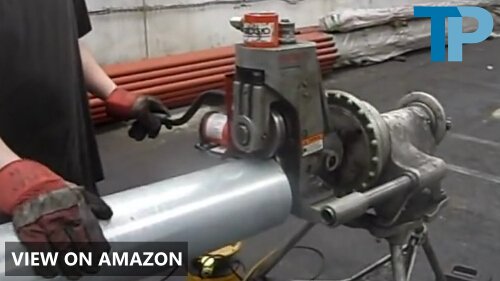 One of the most important aspects of grooving pipes is the ability to set how far into the pipe to groove. You don’t want an adjustment that’s too shallow that will render the pipe virtually useless. Be sure to keep an eye out for the adjustability of depth to ensure that it meets your requirements. Most tools are designed to adhere to basic piping principles, including the ability to set the appropriate depth.

Pipes come in all sorts of materials, including stainless steel, aluminum, PVC, and even copper. The best models can handle most of these materials, but there are a few that can’t do stainless steel or copper. This might not be an issue if you work exclusively with light-duty PVC pipes, but hardcore plumbers should be aware. 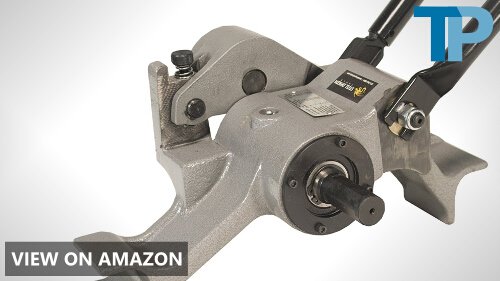 Lightweight combo roll groovers are essential if you plan on grooving in-place pipes. Being lightweight increases its overall portability, as you can take the tool to wherever it’s needed. There are models as light as 30 pounds and some as heavy as 60 to 70 pounds.

Combo roll groovers are operated by cranking the handle which then peels away thin strips of the pipe to make threads. Although the best models are easy to use, employing the help of a driving machine can further simplify the task.

Many combo roll groovers can be mounted on power machines, even some machines produced by different manufacturers. Be sure to read the specs of the combo roll groover to see whether it’s compatible with the driving machine you own or plan on purchasing. 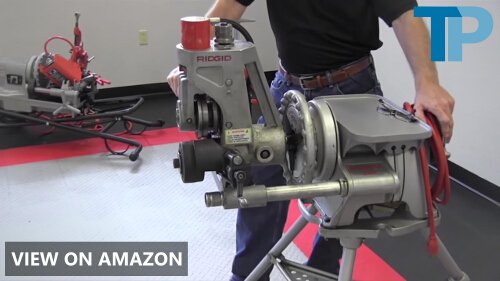 There aren’t that many manufacturers of combination roll groovers out there to choose from, so there’s very little research time needed to find the right model. However, since there is a limited number of models, it’s still important to make sure that the one you get fits your specifications. The following segment will supply you with our picks of the four best combo roll groovers available.

The first item on our list is the popular 48307 from Ridgid. It’s designed to tackle pipes sized between 1-1/4- to 6-inch schedule 10 and 1-1/4- to 3-inch schedule 40. This tool can create grooves in steel, stainless steel, and PVC pipes. It only weighs 33 pounds, so there’s hardly any issue with installing the unit on the end of an in-place pipe.

The depth adjustment gauge is separated from the feed mechanism so users can create repeated grooves at a consistent depth. The 48307 is made of heavy-duty cast iron that’s rust-resistant, making it safe to use outdoors and in wet conditions indoors. Furthermore, this tool is compatible to be paired with the 1822 threading machine by the same company.

Steel Dragon is the lesser-known but still noteworthy manufacturer of the 91 Pipe Roll Groover. Although the company has had some issues with some of its roll groover models, the 915 and 916 are notable exceptions. This tool can be used to roll grooves on pipes as large as 6-inch schedule 40 pipes. 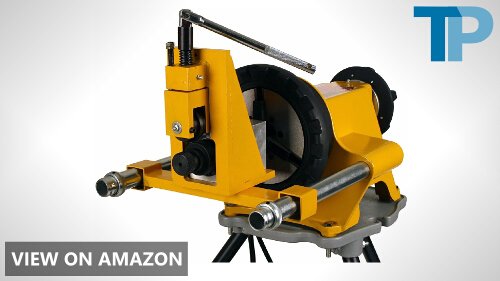 Unfortunately, this tool cannot be used on stainless steel. If you have a Ridgid 300 power drive, then you’ll be happy to know that this tool can be mounted to it. It can also be used on the Steel Dragon 300 Power Drive if you’re loyal to the company. The tool alone weighs 34 pounds, so it’s easy to carry and attach to in-place pipes. The 915 can even be used on thick 12-inch pipes, provided that you purchase the roll set (sold separately).

If you’re looking for a Steel Dragon roll groover that can be used to slice grooves on the end of stainless steel pipes, then the 916 is the tool for you. You can attach this tool onto pipes between 1-1/4- to 6-inch schedule 10 pipes or between 1-1/4- to 3-inch 40 schedule pipes. The tool can be used on steel, stainless steel, aluminum, and PVC pipes. 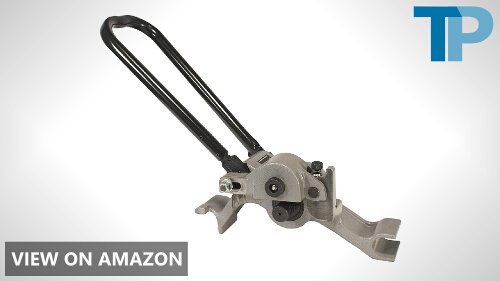 It is a bit heavier than the 915, weighing in at around 51 pounds, but it’s still rather lightweight, and users shouldn’t have problems lifting this unit onto the ends of in-place pipes. The tool mounts perfectly on the Ridgid 300 and 1822 Power Drives for optimal, effortless grooving. The 916 is made of heavy-duty cast iron that’ll break your toe before denting when dropped. 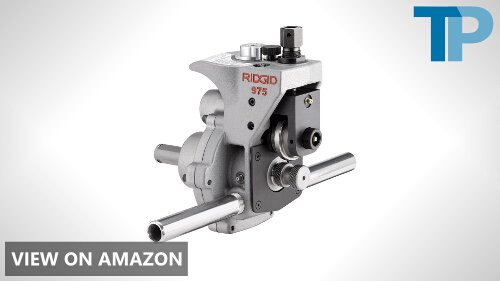 To be able to roll grooves in copper, you’ll need to purchase 2- to 8-inch copper roll change (sold separately). This roll groover can be mounted onto the Ridgid 300 Power Drive to cut down time and energy when creating grooves.

The 25638 is made of ductile iron for better durability compared to cast iron. One of the most impressive things about this unit is that it weighs only 26.1 pounds.

Not every handyman will need to invest in a combo roll groover. In fact, you can purchase pre-grooved pipes from local retailers or through the Internet. However, if you plan on selling pre-grooved pipes or you need such a tool to help with contract jobs, then consider investing in a hand-operated groove driller that can be mounted onto a power driver. 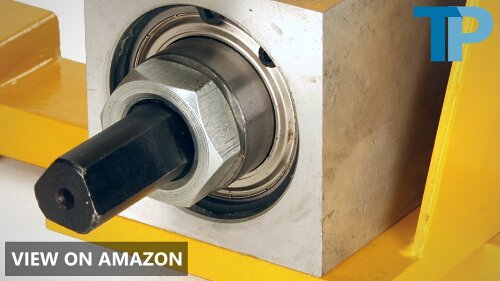 Truthfully speaking, there really aren’t that many manufacturers and models to choose from, but that doesn’t mean that every model is identical. In this article, we’ve recommended two Ridgid and two Dragon Steel combo roll groovers to look at, but we highly, HIGHLY recommend sticking to Ridgid products. 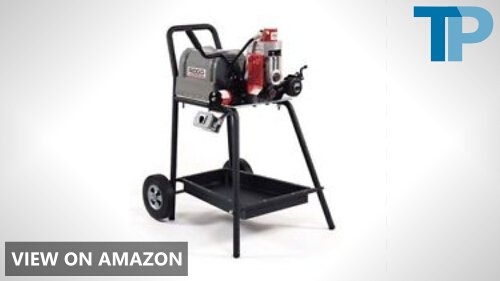 The best hand-cranked combo roll groover, in our humble opinion, is the 25638 975 Combo Roll Groover. It’s an easy-to-set-up and easy-to-use tool for cranking out threads in no time. The process of creating grooves can be tedious, but with this tool, you can feel confident that you’ll get the job done flawlessly every time. Make life easier by investing in the Ridgid 300 Power Drive to automate the job. 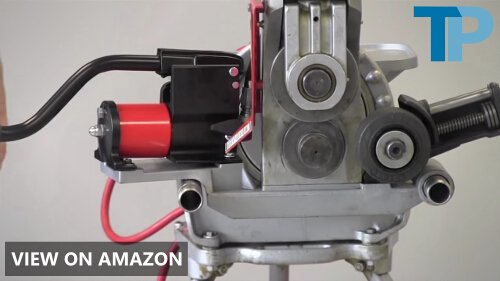