Whether you’re a private contractor or an industry expert, thermal imaging cameras allow you to identify hidden sources of heat which can cause overconsumption of energy, plumbing issues, building imperfections, and many more problems. Using a compact, handheld infrared camera to capture images of invisible heat sources can be an invaluable tool to overcome such issues with complete precision. 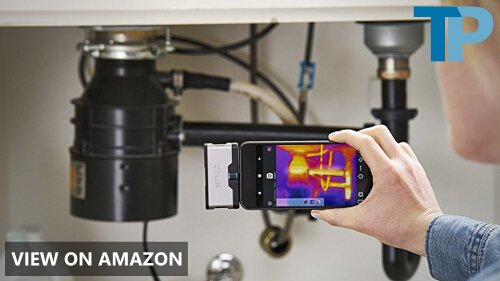 Recently, innovations in thermal image cameras have caused them to become much more affordable. That, combined with improved screen resolution, makes it a must-have piece of equipment for anyone working in the construction world. 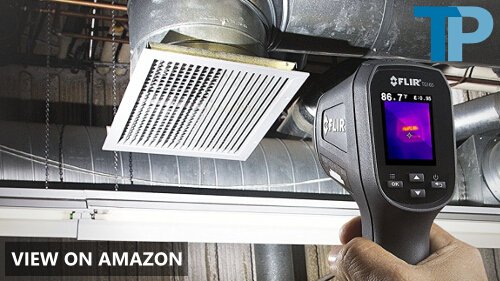 The FLIR TG165 is not one of the best thermal imaging cameras available on the market, but it does do an excellent job at translating invisible waves into something we can see. Most users who buy this unit do not purchase the top-tier thermal cameras simply because they do not need them or the price of one can be off-putting. 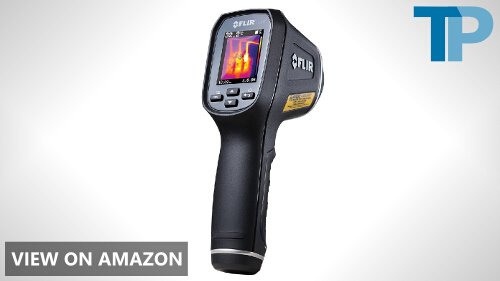 First of all, the battery life of this thermal imaging camera is excellent. With a single charge, you can expect to get up to 8 hours of thermal readings from this camera. It uses two AAA built-in, non-removable Li-Ion batteries made by the company which should last up to 4 years. However, since the batteries are not removable, when they can no longer be charged, you have to send the unit to the manufacturer to get the batteries replaced.

In order to get an accurate temperature reading, this camera uses dual-diverging lasers which frame the area to project the heat source. You can move the camera closer to an area to get a more precise thermal measurement. The crosshairs help with aiming at a spot, and it measures a 1-inch area from 24 inches away – this should keep you away from putting your arm and camera too close to burn hazards.

However, a common problem found among unhappy customers is that it requires calibration in order to accurately read hot and cold sources. However, even after calibrating the unit, the readings would be off by at least 2°, making it unreliable for most professional work. 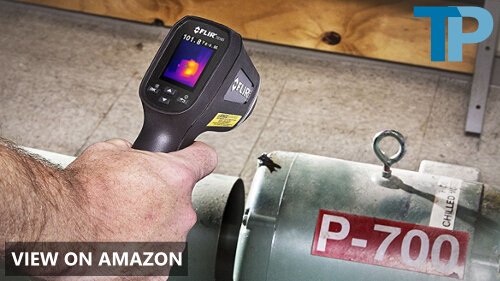 This thermal camera is an attachment for your Android smartphone. Just attach the camera to the USB-C port on the bottom of your phone. 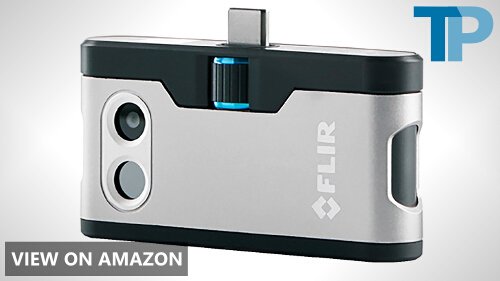 The smartphone attachment comes with rechargeable Li-Ion batteries, and it also leeches battery power from your phone. A single charge, disregarding your phone’s battery life, has a lifespan of up to two hours of constant usage. Some users have complained about receiving a defective battery that wouldn’t take a charge after several months of usage, but FLIR sent them replacement batteries at no extra cost.

The app can be downloaded and setup is pretty straightforward. However, after closing the app, some customers complained that they must be connected to the internet to use the app since it requires you to log in, while others say that they just needed to log in once. This problem might be due to their smartphone’s outdated operating system or errors in the app’s code. Users will need to create an account before using the camera. 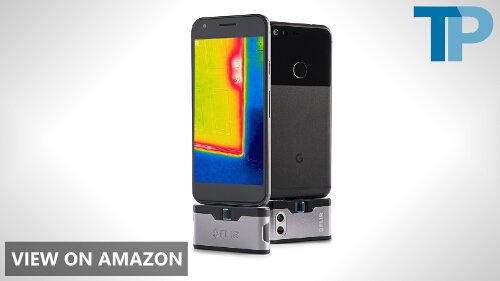 This model uses FLIR’s third generation MSX technology which includes both visible and thermal imaging which can capture temperatures of between -4° and 248°. The resolution of thermal images is a mere 160 x 120 pixels which is expected from such a compact unit. However, what can’t be tolerated is the low 2 to 3 fps, basically turning your recorded videos into slideshows.

The accuracy of temperature readings isn’t all too bad. It can adequately detect the temperatures of cool and heat sources with little trouble, and it can detect images from afar, sparing your limbs and digits from heat exposure.

The FLIR C2 is a compact thermal imaging camera used to capture both hot and cold spots in homes or at work. It is a great alternative for both professional and DIY hobbyists which offers precise thermal readings. 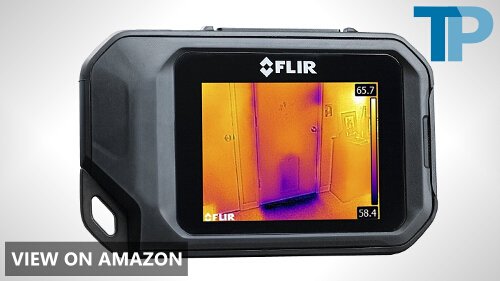 This thermal imaging camera uses a single non-removable, rechargeable Li-Ion battery (included upon purchase). This unit comes with a power brick and USB cable for charging. The cable allows users to charge their device on their computers or even in their cars while they drive to their job site. Charging isn’t all too much of an issue, and it only requires a couple hours before reaching 100% battery power. However, because it uses a non-removable FLIR-made battery, as soon as it becomes defective, you will own one of the world’s most expensive paperweights.

The 45° field of view allows users to capture more of the scene in front of them. This camera can capture temperatures ranging from 14° to 302°. The MSX real-time imaging can offer temperature readings from up to 39.4-inches away from the source, saving your fingers from burns. Customers praise this camera for its screen resolution which lets them to fully see the captured images and read the temperature gauge. 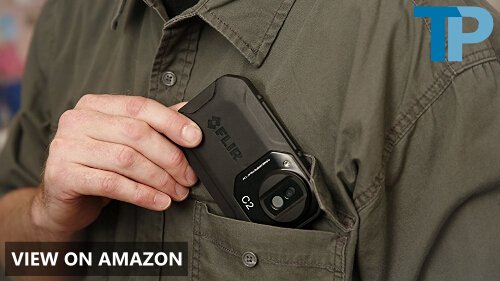 In terms of accuracy, you can expect precise temperature readings when pointing this camera at both hot and cold spots. The built-in memory of the camera can store upwards of 4,500 individual thermal images which users can further process using the FLIR Tools software which comes with the unit.

Earlier, we introduced the FLIR ONE thermal imaging camera attachment for Android smartphones. FLIR also makes a phone attachment for Apple users to plug into their gadgets. 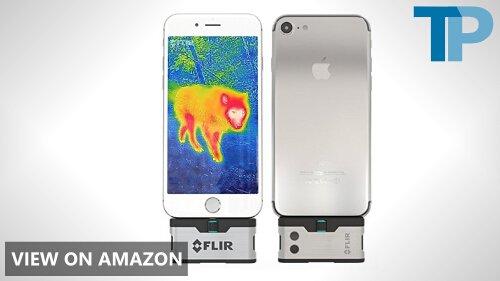 The camera attaches to your iPhone or iPad via its USB-C port. Similar to the Android version of the FLIR ONE, this camera runs off of a single rechargeable Li-Ion battery, but it also steals some of your phone’s battery to power both the app and the camera. Recharging the battery in this camera only takes a couple of hours before reaching maximum capacity, but it drains a lot of battery power. Users might find that the duration of use per single charge will decrease as time goes on.

Similar to the Android version, this camera attachment for your Apple gadget comes with a downloadable app which allows users to modify and share whatever images they captured with the camera. Unlike the Android version, users of this iOS app haven’t complained about needing to constantly login each time they reopen the program. Just like the app for Android phones, users are required to make an account before operating the camera. 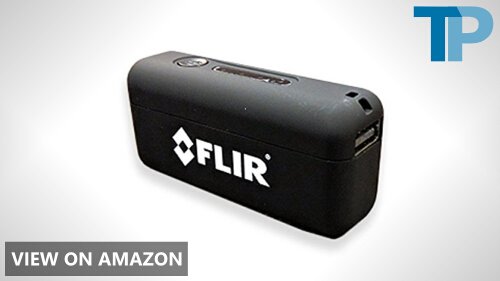 This thermal image camera can detect hot and cold spots ranging between -4° and 248°. The camera captures 80 x 60-pixel images and video, much lower than its Android smartphone counterpart. However, users don’t need to worry about ridiculously low frame rates when capturing and rendering videos.

In terms of accuracy, there’s no reason to doubt that this camera can give a quick and precise temperature reading.

The FLIR E8 is definitely for serious, professional workers who can invest more cash and find better use of this tool at job sites. It’s much different from the previous models mentioned above in the sense that it comes with a more powerful camera and better methods for sharing and processing pictures.

This device uses a single rechargeable Li-Ion battery with a quick-release feature to replace it when the device powers down. Recharging the battery is time-efficient, requiring less than two hours to reach maximum capacity. It comes with an external power brick and USB cable which can be plugged into your laptop or car for charging on the go. The batteries are even protected by a manufacturer warranty for up to five years. 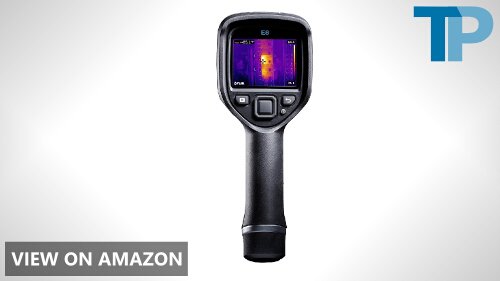 This is a portable device which utilizes Wi-Fi technology to share thermal imaging pictures across the world, given that you have a stable internet connection. This allows professional users to send images, recordings, and reports from the camera to any device with ease. Users are no longer limited by geographic location when sending their files to their headquarters or clients. 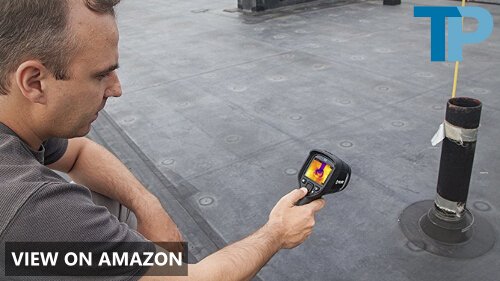 The images and videos can be captured in a number of different resolutions, ranging from 80 x 60 pixels to 320 x 240 pixels. Using the MSX technology to capture thermal images is easier than ever before, and the higher resolution offers better usage of the cameras 45° field of view.

This focus-free camera captures both hot and cold spots with exact precision, eliminating the guesswork when detecting any temperatures you measure.

Although this product is marketed to both professional users and DIY hobbyists, it more likely that professional construction agencies will invest the money to acquire this extremely precise and compact thermal imaging camera. This camera is certified by NIST. 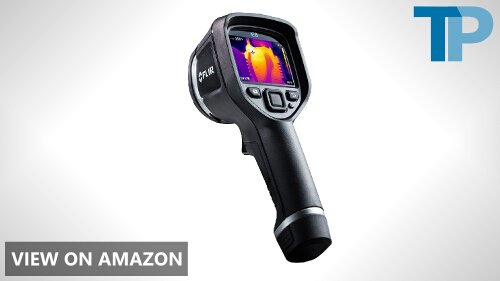 This unit uses a single rechargeable Li-Ion battery which efficient recharging capabilities. It only takes around two hours for the device to reach full capacity from 0%. Similar to the E8 model above, the battery is protected by a 5-year warranty. There is also a quick-release feature to swap out batteries if you have multiples.

This thermal camera makes use of wireless internet technology to share pictures and recording with users across the world. This lets users send pictures and videos by the camera to people in locations around the world for easy sharing. Professional workers no longer need to travel back to headquarters or make visits to clients in order to show the thermal images. 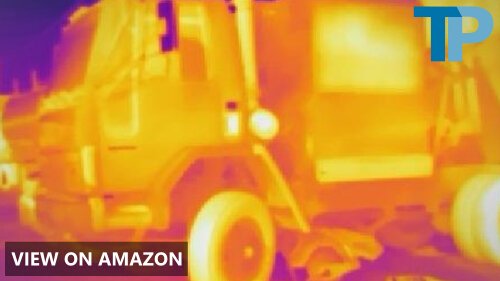 The camera can be configured to take pictures of varying resolutions. The resolutions range from 80 x 60 pixels to 320 x 240 pixels. It also uses MSX technology to take amazing thermal images, and the higher resolution makes better use of the 45° field of view of this high-end camera. This camera is focus-free and can capture accurate thermals images of both hot and cold areas.

This product comes with a certificate from NIST which guarantees that the device has been calibrated to NIST standards.

The FLIR E4 is one of the most cost-efficient cameras belonging to the Ex-Series of thermal imaging cameras. With a pull of the camera’s trigger, users will be able to snap thermal images and record videos, and those recording can be sent to people across the world. 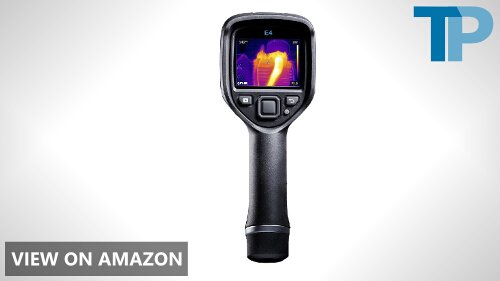 Similar to the other Ex-Series cameras by FLIR, this model uses a single rechargeable Li-Ion battery which takes around two hours to charge but can be used for upwards of six hours, depending on how many pictures and videos you take. It also features a quick-release for the battery in case you need to switch out batteries in the middle of a job.

This device can use Wi-Fi technology to send pictures and recordings to people, given that you are connected to the internet. You no longer need to physically go to a location to unload the pictures and videos you recorded. 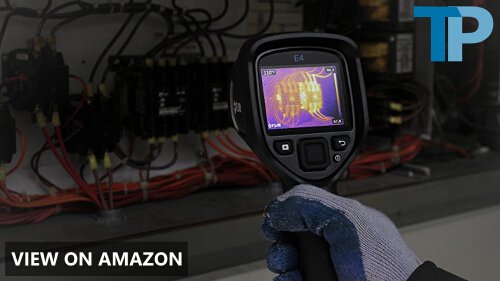 The FLIR E4 is similar to the other cameras in the Ex-Series in the sense that it takes pictures of both cold and hot areas with precision. The camera can take 80 x 60-pixel IR resolution pictures with measurement modes which include area box and center mode. Using MSX technology, users can record images of up to 320 x 240 pixels to capture easy-to-read thermal images with the 45° view.

Accuracy in detecting thermal waves and measuring temperatures is no longer a question since the Ex-series cameras have been calibrated to give accurate readings.

This concludes our review of the best FLIR thermal imaging cameras available right now. Between some models, it’s apparent that there aren’t really too many differences that set them apart, but with any FLIR camera, you know you’re getting a precise temperature and thermal reading. In order to truly enjoy accurate readings and convenience of sharing images, your best bet would be to select one of the Ex-Series cameras – the E8, the E8-Nist, or the E4. 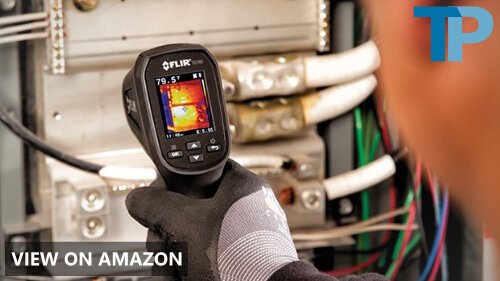 With any one of these cameras, you know you’re getting the right readings so you won’t need to invest more time and money into finishing a single task. However, if you’re on a budget, the FLIR C2 can be a cost-efficient way of getting accurate readings of hot and cold spots.